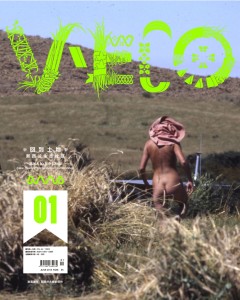 Click here to view the contents of the magazine, text mainly in Mandarin. This cover pic is by John Glascow, of Graham Downs

In 2012 I wrote an MA thesis in history on the NZ commune movement of the 1970s: Endless Connections
In 2013 I spoke in Beiijing as a guest of China’s largest housing development company Vanke, at the launch of a new magazine which focuses on ecology and sustainability in relation to housing, V-ECO.

I briefly explored the Forbidden City and a few streets near my hotel. I also spoke about NZ Intentional Communities. I had been invited to Beijing by Ou Ning, a chinese artist/writer/musician and social innovator who is worth reading about: http://en.wikipedia.org/wiki/Ou_Ning

Another New Zealander, Robin Allison of Earthsong Community in Auckland, was also invited by Ou to speak at the launch of V-ECO.

Our air tickets and hotel bookings were arranged by Hu Ben, a young ideas man for Vanke. The next few pictures are of the Forbidden City, which I visited by myself on my first morning in Beijing. I very much enjoyed myself, although The Unforbidden City would be my  name for it. 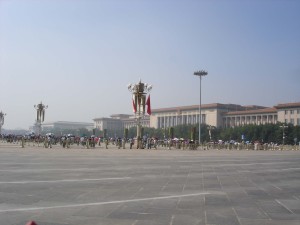 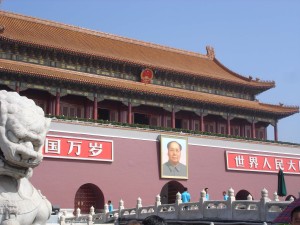 entrance to the Forbidden City 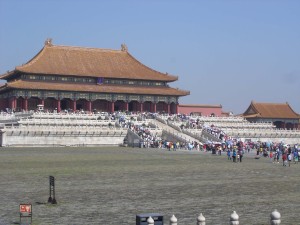 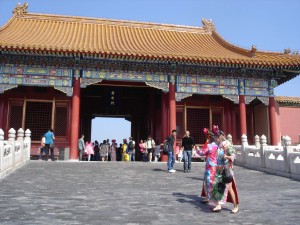 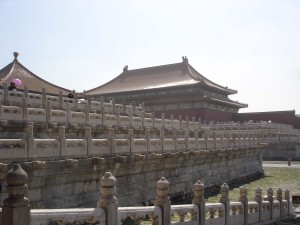 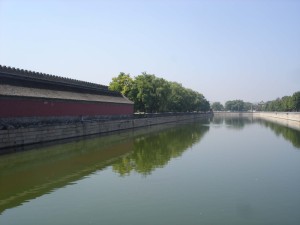 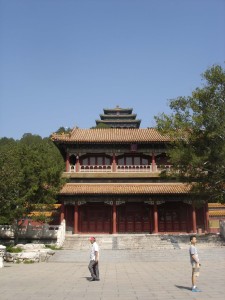 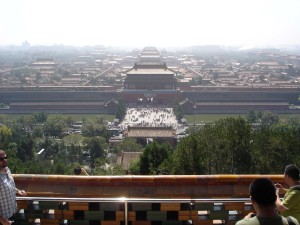 That afternoon Ben and Rena showed us a temple that used to be a palace. It seems the Tibet – China question is an ancient one, and this is Hu Ben’s modern take on it: The Mongols and Manchurians converted to Tibetan Buddhism before invading China, hundreds of years ago. Beijing, as home to emperors who tried to keep north and south together, has since been in a dynamic relationship with Tibetan Buddhism. What Ben admires most in this temple, a favourite of his, is the play of light. 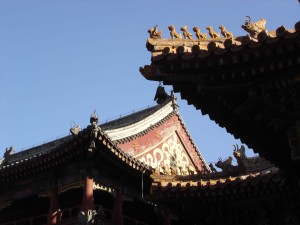 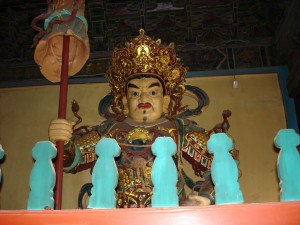 Basically the deal was the Emperor became, officially at least, the Dalai Lama’s apprentice. The palace complex here was built at first for an emperor, much along the lines of the Forbidden City only smaller. It was then given to Tibetan Buddhist Lamas and to Buddha. There is a huge gilt Buddha carved out of sandalwood inside, no photographs allowed. Some people took them though, and no one said anything. Rules, including road rules, seem pretty casual here. 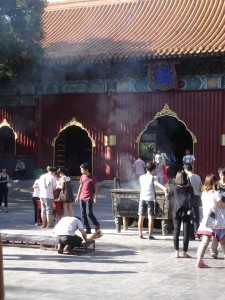 A lot of people, maybe half or more, were burning incense, doing reverence and turning cylinders. Hu Ben told us this has never stopped under communism except briefly during the cultural revolution. He says that was a time when Chinese ‘baby boomers’ like his parents, were sanctioned by Mao to shake things up, something had to be done with them at the time is his take on it, and he sees it as being driven from the bottom up, not the top down. It didn’t ultimately change things like these temples much. But it did say ‘prepare yourselves for change’ and China has been changing rapidly since then.

Though younger than Ou, who is an artist, writer, political innovator and musician, Ben was the one who brought in Ou to sell the V-ECO (Vanke eco) concept a bit better than it had been sold before. He calls Ou ‘the talent’ and Vanke ‘the money’ and it was his idea to bring them together. 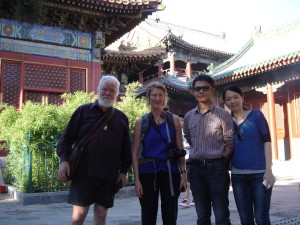 Myself, Robin, Hu Ben and Rena 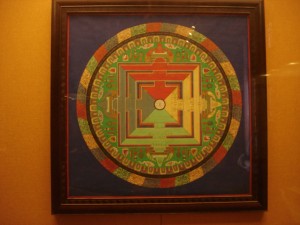 A Mandala in the Temple Museum 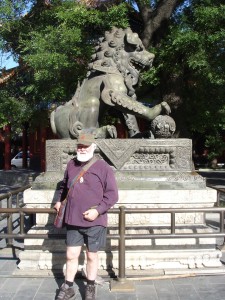 The next day was Sept 15th, and by lunch time we had been escorted to Vanke’s venue for the launching of V-ECO, a high rise in the downtown High-rise commercial heart of Beijing. 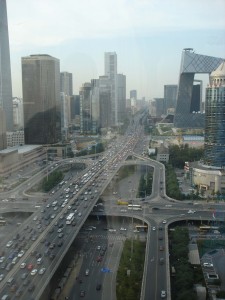 The view from the venue for the V-ECO launch 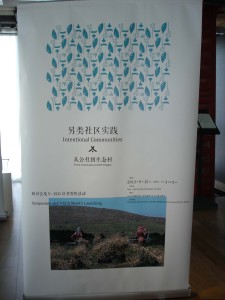 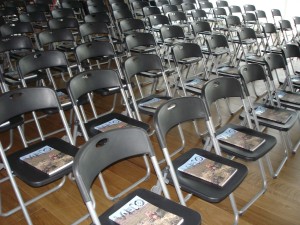 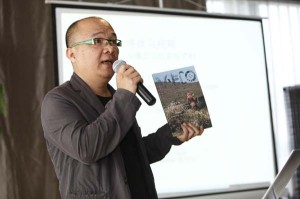 Ou Ning spoke at some length,  entirely in Mandarin. Then it was my turn. I started with a mihi in Maori;

I translated that into English (everybody there seemed to understand English) and then presented my PowerPoint, created that morning, combining my own experience of Rainbow Valley with what I have learned from others about its earlier history. 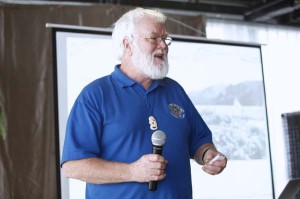 I used pictures to illustrate my view that our stewardship area has been transformed in positive and beneficial ways for people and for other living things since 1974 when our community began. I also emphasised the extended family aspect, and that bringing up children together seems a positive thread running through all such NZ communities.

Robin spoke next, and her presentation was more detailed, practical and well illustrated than mine, especially as I had only put my PowerPoint together that morning, after I found out we were able to use one. 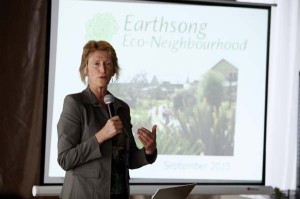 The next speaker, a Chinese woman, spoke about a community assisted agriculture project she helped manage near Beijing. 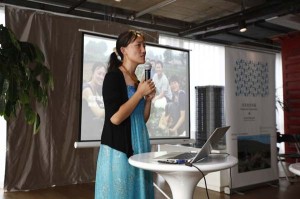 We then had fifteen minutes for snacks and drinks before we reconvened. I had counted an audience of about 45 for the main talks and about 25 of these stayed on for the discussion. The first questions focused on the legal structure of Earthsong, its unit titles similar to those of condominiums such as the home of my nephew Suren  in Singapore. 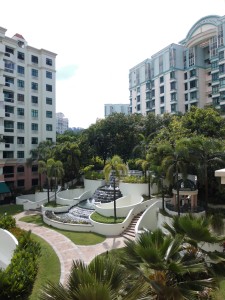 The view from Suren’s apartment in Singapore

It became evident that many in the audience were frustrated that in China any such title to land or housing is still problematic. There was heated discussion on this, but as it was in Mandarin we NZ guests could only understand as much as Ou was able to translate for us. 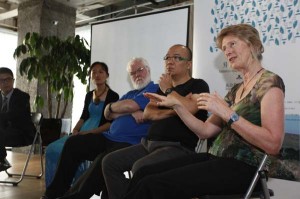 Robin explained more about the structures of Earthsong, after which someone asked me if I thought a community like Rainbow Valley could be a useful model for modern China.

I said I didn’t think that we could teach them much about villages, as ours was only 40 years old, whereas they had been doing it for millenia. Someone in this very urban audience quipped “we forgot”. Someone then asked me what would happen to Rainbow Valley if none of our children wanted to live there. I said I didn’t know, but we were holding a place, whether for our children or for others. For me it was enough to try to pass on in our turn the land that we received from those like the Buchanans who came before us and left their investment as a gift to us. 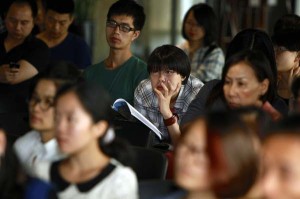 Someone asked Robin if she could give three reasons for choosing to live in such a community.  Her reason number one was to find a way of living on the earth that was more caring and sustainable than the mainstream, and reason number two was to evolve a more cooperative way of living than straight out capitalism. For number three she mentioned several more specific benefits of number two, including sharing parenting.

When I was asked I said that my three reasons were the same as hers. I also mentioned milking the cow, making cheese, riding my horse, all things that I can only do because i share a farm and because such a lifestyle was, in a community, affordable.

After the talk we banqueted with all our hosts. 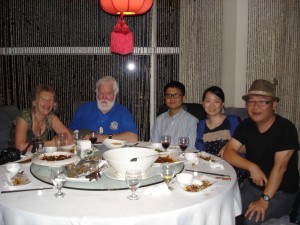 While in China I saw no signs of overt oppression, though I read of harsh sentences for ‘terrorists’ and noted armed guards in Tianenmen Square. I certainly saw no lack of free speech. I saw a very positive, dynamic, confident society. 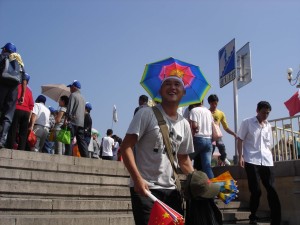 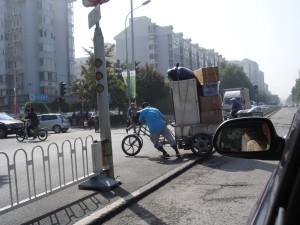 After my trip to China a young Chinese woman called Oyane visited Rainbow Valley as a wwoofer, and I was amazed to learn how much we seem to have in common.

Human similarities seem greatly  to outweigh cultural differences. China seems not to be the monolithic and conformist state I grew up to believe it was. Ou, Ben and Oyane, the first Chinese people I have really talked to, are as diverse and interesting as any of my other friends, and it appears to me, if anything less monocultural. 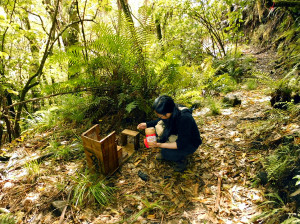 At the V-ECO launch I met a young idealist called Vera, see below: