I have recently altered my 1993 reconstruction of Heemskerck, as can be seen in the line drawing below. Note the new mizzen topmast and topsail and, at the stern, the appearance of a jutting roofed extension to the great cabin, which in addition to its 4 rear facing windows now has an extra window at about 45 degrees on either side. 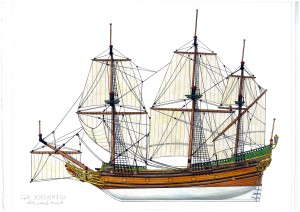 All my reconstructions of Tasman’s ships since 1992 are based extensively on the work of Dutch expert Albert Hoving, but I have modelled sheerlines (the upper profile of the hull) more on contemporary illustrations accompanying Tasman’s journal than has Hoving: 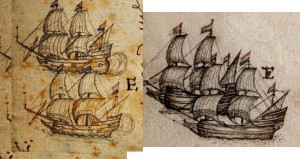 At left Blok Fragment profiles, and at right State Archives profiles, each from the ‘Murderers Bay’ illustration. In each the Heemskerck is in the foregroound.

I have also added mizzen topmasts on both ships because while these do not appear in the  contemporary side-views they are mentioned in the still extant Sailors’ Journal.

Perhaps the best contemporary stern view is that at left below, depicting the Heemskerck in what is now Tonga. My model, built in 1994 and shown at right, closely adhere’s to Hovings, and has not the jutting roofed gallery suggested in the Tonga picture that my current reconstruction does. 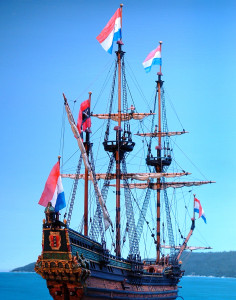