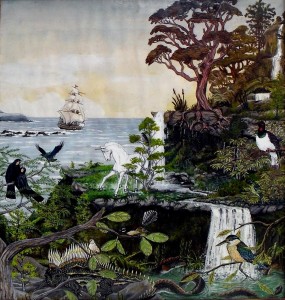 When I was twenty I painted this picture for my sister Margaret, or more precisely,  for her children, since she was then expecting the first of them, Conal. He lives in Paris now, with children of his own, and that is where my daughter Beth took the above photograph, in what appears to be an ornamental fireplace. 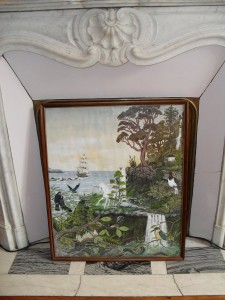 The story behind this may be worth telling, as there are interesting links both with Peter Jackson’s  filmic trilogies that locate Tolkein’s Middle Earth in New Zealand and with Abel Tasman’s 1642 discovery of Aotearoa for Europeans, which is the reason that our European name connects us with part of the Netherlands.

When I was nine or ten I fell in love with European sailing ships, especially warships of the 16th and 17th centuries, and I made many cardboard models of these, as  explained in a diorama. 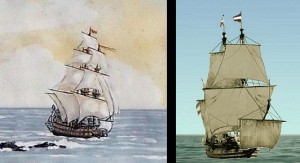 At that time I had no idea what Tasman’s ships were like, as New Zealanders, despite our country’s Dutch name, seemed more intent on celebrating Cooks achievements than Tasman’s. And as a boy I was disappointed with Cook’s Endeavour, a flat unprepossessing cargo ship which lacked the carvings, colour and cannons of European warships I’d constructed cardboard models of.

The Last Unicorn extends Tolkein’s mythology, which I took fairly seriously back then. Appendix A of THE RETURN OF THE KING explains that nearly at the end of the ‘second age’ of our world: “Ar-Pharazon set foot upon the shores of Aman the Blessed, the Valar laid down their Guardianship and called upon the One, and the world was changed. Numenor was thrown down and swallowed in the sea, and the Undying lands were removed forever from the circles of the world.” Until then the ‘Undying Lands’, or faery lands, as we might say, were in this world, across the ocean to the west of Numenor, and they were places men and elves of Middle Earth could sail to. 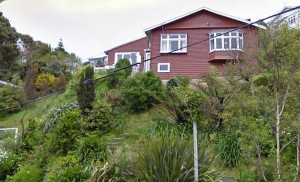 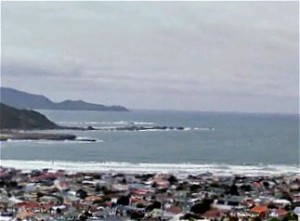 Margaret gave me the germ of the idea for her childrens’ painting by telling me that in a dream she saw a unicorn, which then vanished. As I remember it she said the unicorn was standing where her house is now. My painting was inspired by that dream.

What if not all of Faeryland was lost in the downfall of Numenor? Perhaps one chain of faery islands long survived, with forests green in winter where the song of birds was like the sound of bells? The last of Faeryland on earth, with dragons, giant eagles, and of course the fabled unicorn.

What happened? A tall human ship put in to land, so every magic creature had to choose; whether to stay, and lose most of their magic, and be ruled by  humans, or  return to Elvenhome beyond the circles of the world. Most stayed, and so their magic faded, although to some extent it still remains. But the unicorn left us ‘you’re never gonna see no unicorn’ as Silverstein put it in his well-known song, although his explanation for the disappearance was more mainstream than mine, perhaps because I preferred The Return of The King to Genesis.

I painted the last unicorn as I imagined him; after my sister told me that she saw him in Kilbirnie, in a dream. I doubt her dream had waterfalls, as no such stream runs past her house today, except in very heavy rain. However, it’s a steep and craggy slope, and as I sketched in overhanging trees, a mossy terrace (for the unicorn), a rocky outcrop (for the eagle) and a rock below it (as a dragon’s basking place), the waterfalls (and serpents’ pool) became a part of it.

As I imagined her this tall ship somehow reached New Zealand before Kupe did, in which case she cannot have been the 56 gun Frenchman  of Louis XIV’s navy  she 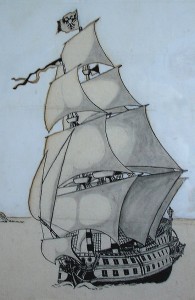 so resembles. Perhaps in Tolkein’s Fourth Age of middle earth, ‘the age of men’, one of Aragorn and Arwen’s descendants built this ship; if so it would have been thousands of years ago. Perhaps a memory of it was in some way handed down to reach French shipwrights of a much more recent time.

According to this picture for my mother, drawn at about the same time as the unicorn painting, this was not a warship at all; the openings in her sides are windows and not cannon ports. If she has weathered storms, the glass in them must have been hugely strong, perhaps the work of Gondorian craftsmen. The double headed eagle flag suggests another mystery; could this emblem as well have been Gondorian? Although the flags flying from the painted ship in The Last Unicorn seem to be different ones. 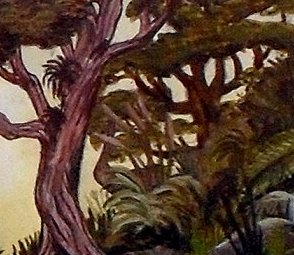 A moa stands partly concealed beyond a rata tree 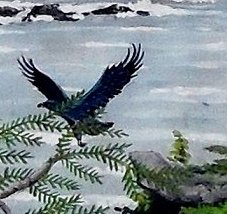 In The Last Unicorn are various New Zealand birds,some now extinct: kereru, karearea, piwaiwaka, kotare,  komako, titipounamu, moa and what may have been the world’s largest eagle, known to Maori as Pouakai. Possibly not; the picture shows a giant blue eagle taking flight, yet Maori speak of Pouakai as being red. Perhaps the blue eagle did choose to leave forever when the humans came. 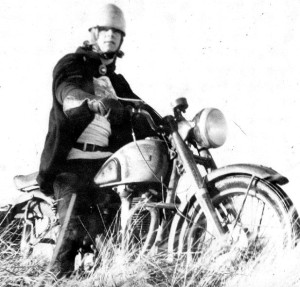 But it is also possible he flew to welcome them and afterwards they used him in their heraldry, as I have done in mine. Gondor is not known to have used an eagle flag in the third age, yet eagles were the heralds of Manwe, King of the Valar; they helped Earendil overcome Morgoth’s winged dragons in the War of Wrath, and later aided Sauron’s enemies in the War of The Ring. I named my first BSA motorbike Windlord, after the King of the Eagles of the Misty Mountains in Middle Earth’s third age. 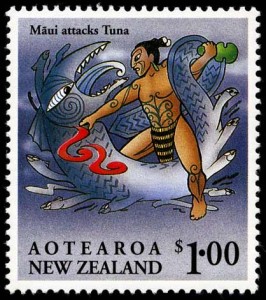 Maui tikitiki a Taranga had married her. Maui then cut Tunaroa into thousands of pieces, each of which became one of the much smaller tuna that we know today. This seems compelling evidence that ‘The Last Unicorn’ depicts a time before Kupe or other Maori reached New Zealand; Maui’s battle with Tunaroa took place in Hawaiki and is told of throughout Polynesia.

Dragons are not all evil, and in much of Asia are  revered. Most Maori dreaded lizards, but this dread did not always extend to our largest and most ancient reptile, the tuatara, seen in The Last Unicorn in his original dragon form. Because he chose to stay, not go, he has become much smaller, but scientists observe he still retains a vestige of the mysterious third eye with which he used to see into the future 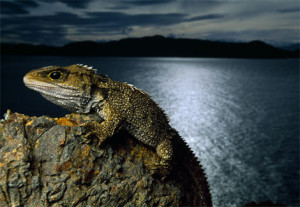 As I’ve grown older I’ve begun to see how my past preoccupations and interests intersect with my present ones in some surprising ways. I wanted there to be a Movie of the Lord of The Rings,  located  in New Zealand, and that has come about.  As I drove past with my family during school holidays or later rode past on Windlord, I thought I recognised in New Zealand a lot of places from Tolkein’s Middle Earth: like Jackson I saw Mount Ngauruhoe as Mount Doom, and like him found in Te Wai Pounamu, the South Island, a lot of places to locate  the rest of it.

I hoped to make a LOTR movie myself, in later life, expecting I would paint the characters and settings first, as photorealistically as possible, and then somehow animate them. At twenty, I imagined I could do anything.  All that survives of those ambitions in a finished form is The Last Unicorn, and it is really not the same idea, as Tolkein’s trilogy was set in Middle earth, not in some last lost isles of elvenhome. But what my unicorn painting does do is  ‘discover’ New Zealand as a part of Tolkien’s mythic sub-created universe. And Peter Jackson and Richard Taylor have since taken that idea to the world.

My painting was a sort of collage of borrowed elements, arranged into a fanciful landscape. The ship was based on a reconstruction in Bjorn Landstrom’s book ‘The Ship’, and the unicorn on a warhorse illustrated in James Grant’s ‘British Battles on Land and Sea’. Some of the birds were simply copied out of Buller’s ‘Birds of New Zealand’, some of the trees from a convenient handbook of New Zealand native trees.

Mountains and bays, rich greens of hanging forests, white calligraphy of waterfalls; the subtle colours and the music of the forest birds, the flowering trees, the glassy lakes, the grassy wilderness, Elvenhome can be our home if we see it is:

“Until he hears, on strands of pearl

where ends the world, the music long

the yellow gold and jewels wan

He saw the mountain silent rise

where silence lies upon the knees

beheld afar, beyond the seas

A wanderer escaped from night

to haven white he came at last

to Elvenhome the green and fair

where keen the air; where pale as glass

a glimmer in a valley sheer

the lamplit towers of Tirion

are mirrored in the Shadowmere 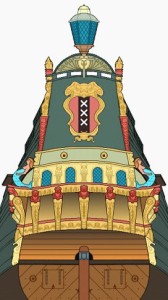 Now as I look  the unicorn and ship seem the best parts of it. I’m still trying to paint the forest we call bush and Maori Ngahere. Sometimes I even try my hand again at those enchanting birds.

I see the unicorn as Margaret’s and the ship as mine. Two years later I wrote a poem about an English settler ship approaching Wellington harbour which with its heavy-handed post-colonial overtones contains a more mainstream view of New Zealand history.

Not until 1992, when I was forty did I learn that a small but richly carved and painted seventeenth century warship really did discover New Zealand for my European ancestors. And that began another project I am still engaging with. 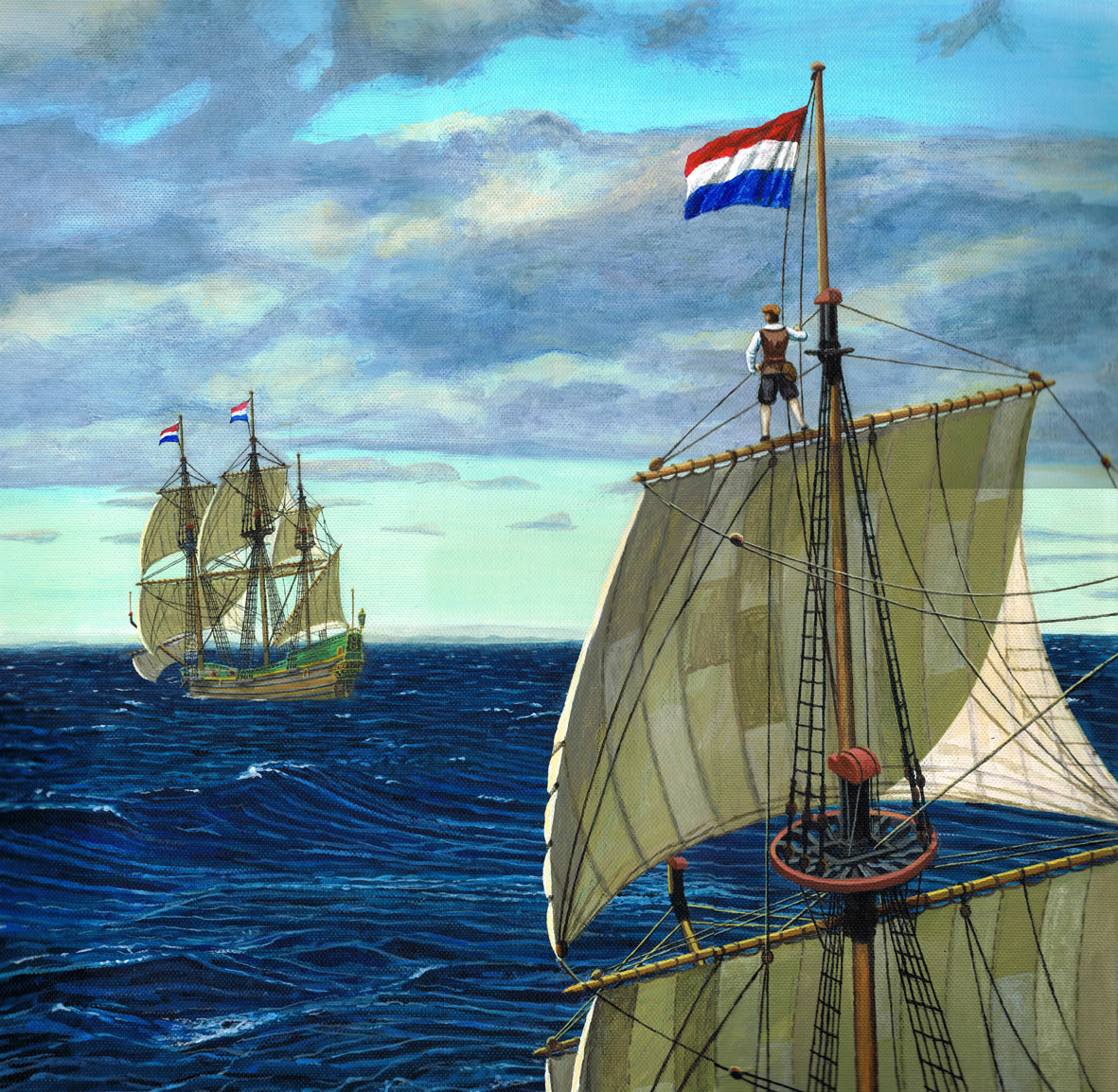 2 Responses to The Last Unicorn