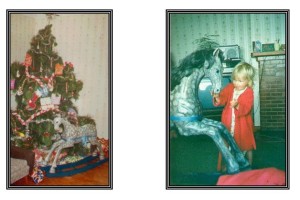 On the day that the dapple grey rocking horse came

Katy the girl said “Have you got a name?”

The rocking horse whispered it into her ear

The word that was only for Katy to hear

She listened and smiled, and Katy agreed

It was just the right name for a dapple-grey steed

It suited him nicely: But still all the same

She wanted to know how he got such a name

And she wanted to hear from the horse’s own mouth

About all his adventures before he came south

And breathed a soft horse purr, as much as to say

“I’m happy to tell you, but first let us ride”

So Katy the girl put a chair on one side

And she climbed on his back, and the horse tossed his mane

And away they went galloping over the plain

Katy rode like a queen without worries or fears

Until he had run far enough for the day

He slowed to a canter, and then to a walk

And the dapple-grey rocking horse started to talk:

“Prrrrrr! That feels better. Did you enjoy that?

I like a good gallop – I’d hate to get fat

I’m a Christmas horse Katy. When I was a foal

I lived in the Christmas House, near the North Pole

With old Father Christmas, and snow bears and elves

And thousands of wonderful toys on the shelves

There was snow all around us and blizzard and storm

But we didn’t mind – we were cosy and warm

The big Christmas House is a magical place

And I like Father Christmas – he has a nice face

If the weather was good enough, out we would go

To play through the day in the deep drifts of snow

Or out on the ice rink – my favourite place

And nothing’s more fun than a rocking horse race

He’d laugh at our antics, and then he would shout:

‘You watch what you’re doing you mischievous elves –

I want to see all those toys back on the shelves!

They’re supposed to be presents – don’t you forget that!’

Then a very big snowball would take off his hat

So he’d laugh even louder and join in the fun

With the top of his head showing bare as a bun”

“But” Katy insisted  “who gave you your name?”

“Have patience,” the horse said. “I’m getting to that

But you should have seen Santa without any hat!

T’was the week before Christmas, the best time of all

The Christmas Tree glowed in the great Christmas Hall

Which, just before Christmas, have magical powers

Elves sing to them softly and pick them with care

Then dance with green wreaths and red flowers in their hair

But the brightest and best of the flowers they weave

Into wonderful garlands, and each Christmas Eve

When old Santa’s Reindeer come to his call

The garlands are ready – enough for them all

As long as those garlands stay fresh and stay bright

The reindeer and sleigh have the power of flight

One fine afternoon, just a few days ago

It was time for our very last game in the snow

There were lots of goodbyes, because all of us toys

Were going with Santa to good girls and boys

An elf called Linerre came over to me:

‘Dapple Grey’ she said softly ‘You’ll soon have to fly

with Santa: Have this to remember me by

May it bring you good fortune wherever you fare’

Then she took off the flower she wore in her hair

(A Pohutukawa – the vividest red)

And she carefully tied it on top of my head

At once I was filled with a marvellous power

From my head to my tail, because of that flower

‘Do you feel like a ride, because I want to run?

‘Alright’ she agreed. ‘and it ought to be fun’

I was feeling as frisky and fresh as a foal

So I headed for Icecliff, behind the North Pole

When we got to the top, a platform of snow

Looking down on the Pole and the big house below

I felt full of daring and said to Linerre

‘Lets try out the ski-jump – it’s just over there!’

‘You’re the boss, Dapple-grey – I leave it to you’

So I dipped my head downward, and downward we flew

Down the sheer northern slope on the ski jumpers trail

I shot like a star with the wind in my tail

Then outward and upward and into the air”

“It was awesome!” he told her “My very first flight”

It was magic – I never expected to fall

But I saw our friends watching wide-eyed from below

Which gave me the notion to put on a show.

Then dived on the nearest and gave them a fright

Then up, up and over, my first loop the loop

And down to the ice-rink with one final swoop

Straight over the crowd like a shaft from a bow

Till we touched down at last like a snowflake on snow

Right beside the big house, just outside the main doors

Katy pictured the scene when her rocking horse flew

And she wondered if she could go sky-riding too

She searched in his mane – was the flower still there?

It was! A red blossom, still soft and still bright….

“I’m afraid that we can’t, which does seem a shame –

Remember you asked how I came by my name?

Well, I just had another adventure today

While coming to you in the magical sleigh

With Santa in front, and the sides painted red

And a team of fine reindeer harnessed ahead

Through the dark before dawn he was racing the sun

With his round of deliveries nearly all done

I think he gets tired – you know he’s not slim

And more and more children are waiting for him

Needing more and more presents (the list grows each year)

And sometimes, by morning, his eyes aren’t so clear

Which might not have mattered, but if you ask me

People used to slow down around Christmas Eve

It used to be sacred, or so I believe

They sang and hung stockings and then went to bed

But nowadays some of them leave home instead

Anyway, there we were, flying over the sea

At two in the morning, perhaps nearer three

And Santa was nodding, just starting to snore

When something went by with a terrible roar

I saw lighted windows – it went hurtling past

Like a hurricane, leaving us tossed in it’s blast

Our reindeer panicked, our sleigh overthrown

And poor Father Christmas – he fell like a stone

Calling up as he plummeted down toward the sea

‘Help! Somebody help!’ and it had to be me

With the Pohutukawa I just had a chance

So downward I dived with the speed of a lance

‘Hold on Father Christmas, and don’t be afraid’

‘Dapple Grey!’ he exclaimed ‘What are you doing here’

‘Hold onto my rockers’ I said, coming near

‘You seem to be flying, but how can that be?’

He was too big to ride me, or I was too small

And it took all my magic to slow down his fall

I could feel it going, just draining away

But there, just below, were the reindeer and sleigh

And he dropped in his seat nearly skimming the sea

And I landed behind, and he turned round to me:

‘Well, Dapple’ he said ‘that water’s too cold

And I’m taking you now to a very good child’

Then he rested his hand at the top of my mane

Just touching the flower ‘No need to explain

I was lucky today to have you at my side

Your new name is Parachute – bear it with pride’